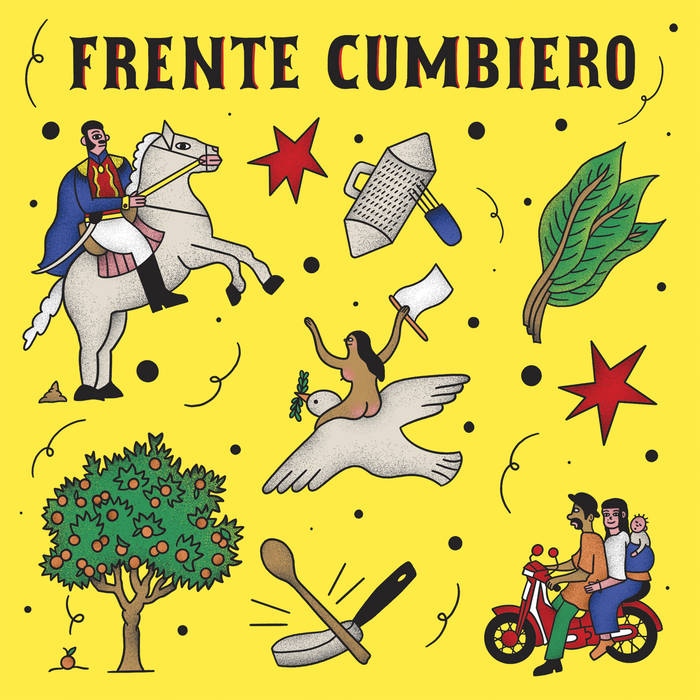 thugbrarian13 just another great release from NYCTrust, which has become one of my favorite labels. keep 'em coming

For years, Frente Cumbiero has served as the torchbearer of a new wave of experimental exploration in the diverse modern-day cumbia canvas. Led by Mario Galeano Toro, a Colombian native and accomplished veteran of Bogotá’s rich music scene, the group first connected with listeners outside of South America via their head-exploding 2010 debut on Names You Can Trust. “Pitchito” would become a cult favourite, a catalyst for the Brooklyn-based label, and soon after a bonafide rarity. Those beginnings of Frente Cumbiero focused on an honorary recognition of the massive musical impact that the many formations of cumbia have had over the decades within Colombia. Subgenres such as gaita, porro, vallenato, and caracolito, to name just a handful, have all played their part within the evolution of the country’s tropical music lineage. That deep-digging determination coupled with a truly unique and talented musicianship has informed Frente’s music, some of the most forward-thinking and reverential examples of the current tropical scene. It has led to some incredible opportunities and collaborations in Europe, Asia and the States, including genre-defying recordings with London’s Mad Professor and Japan’s Minyo Crusaders.

Still, Galeano Toro’s assemblies with Frente Cumbiero have been scarce amongst his other exploits, splitting time as player and producer in other ground breaking projects like Ondatropica and Los Pirañas over the recent years. After three 45 single releases together with NYCT, the time away has left everybody wanting for more. Now, reassembled and seasoned with years of touring and gigging in a multitude of projects, the group’s current quartet of Galeano Toro (keys and synths), Pedro Ojeda (timbales and percussion), Marco Fajardo (tenor sax) and Sebastián Rozo (bombardino) is a stripped down powerhouse of unadulterated psico-tropi swing, a beautiful Colombian musical stew, incorporating a host of flavors from the melting pots of the Pacific, Caribbean and Atlantic pathways. The final result is of course quite unclassifiable, simply a new breed of good music and a dancefloor delight.

Under License from Salgaelsol and Biche.